There are times when it can and should (sometimes) be done…
installing Windows 2000 on very old computers with only 32 megabytes
(MB) of memory (RAM). I’ve seen 64 and 96 MB RAM computers struggling
with Windows 2000 but if you configure the system correctly it can run
fast and well. Note though that there is no “magic bullet”. Although
your old computer can run faster it will never compete with modern
hardware in terms of performance.

This is a short guide to show you how to run Windows 2000 on such old
computers and maintain a fast (as possible) performing system.

Why would you do that?I had an old but very leight-weight small subnotebook that I
needed for after hours support for one of my clients… I needed to
install Windows 2000 to use my mobile phone (LG U8110/U8120) as an
infrared modem to access the
high speed 3G data network. Your reason might be that you have an old
PC you don’t want to throw away and Windows 95/98/Me might not give you
the features you are looking for… be aware though that if Windows 98
meets your needs it is stupid to upgrade because you have lots less
memory to work with when installing Windows 2000.FACTS

Before the tweaks in
this document

Windows 2000 would startup/boot in
30 seconds and you would have between 3-4 MB RAM left for your
applications. The system responsiveness is sluggish.

AFTER the tweaks in
this document

Windows 2000 would startup/boot in 10 seconds
(using hibernation) – which is faster than my 2.4Ghz/400MB laptop ..
and you would have more than 10 MB RAM left for
your
applications. The system responsiveness is rather fast. 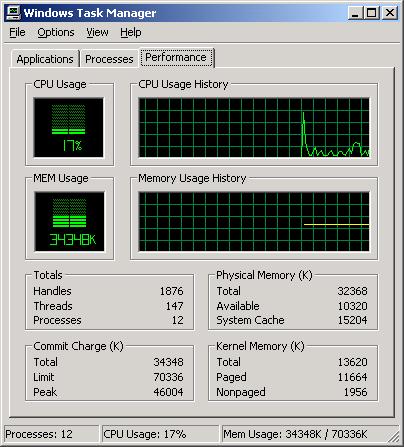 Figure 1: The performance of my
old subnotebook after tweaks

I know… maybe not the biggest resource saver (especially because the
graphics card probablky handles this one.

You can run with 16bit color on the desktop (if that is what you
graphics card supports best natively. Be aware though that some
computers can run with higher color depth but the copmuter
processor/CPU (as opposed to the graphics CPU) may have to do more…
but usually 16bit is fine.

Then you disbale high-color icons, you disable fading effects, smooth
fonts and “show window contents” when dragging – in other words,
disable anything fancy 😉

Playing sound takes CPU resources and getting sound files takes
memory.. disable sound effects, and even disable the sound card… When
you run on 32MB there are sacrifices that have to be made… I use my
32MB subnotebook for non-sound things so disabling sound card makes
sense because the drivers take up resources.

This is probably the single-most important step after the installation.
Windows loads lots of services you might not need and they take up LOTS
of memory and CPU (considering we only have 32MB).

Disabling following services in the “Control Panel -> Administration
-> Services” makes your computer able to act on the network,
internet and other things while freeing up lots of memory;

You can also remove these services

This is probably the second most important step after installing
windows and disabling the services…. This little tool can remove lots
of hidden (and for you unneeded) applications and settings embedded
deep inside windows.

Chances are that you won’t have a printer connected to the computer..
Removing the LPT port (in the control panel -> system -> device
manager ) is a good idea … you can still print over the network,
albeit a bit slower (since we disabled the print spooler earlier)..
thats o.k.
– it is all for the greater good.

again – its about cutting down on whats running.. do this and connect
to other computers instead of letting them connect to you.

Other registry tweaks found on the net;

”
“HKEY_LOCAL_MACHINE\Software\Microsoft\Windows\CurrentVersion\Explorer”, create a DWORD key “AlwaysUnloadDLL” and set it to 1. Without doing this, your Libretto will use more and more memory even after you close all the open applications. Very cool tweak.“HKEY_LOCAL_MACHINE\System\CurrentControlSet\Control\PriorityControl”, create a DWORD key “IRQ8Priority” and set it to 1. This way CMOS access and overall system performance is improved.

Install and use Tweak
UI

Tweak UI is an old but good fere application from Microsoft to tweak
certain windows saettings.

Install it and use it as follows;

Hibernation allows you to start your computer very fast. A typical boot
process can take 40 seconds.. .resuming from hibernation only takes
10-15
seconds – very much worth doing! (just remember to do a real
reboot/restart every few days to make sure everything gets “cleaned up”)

How to use the computer on a daily basis

Next thing is to install office or whatever.. Office 2000 can run on
this computer… make sure though you don’t run a “pure/normal” install
but just copy the files over from anbother installation… this limits
bloat and drivers decreasing overall performance of your system.

Running
the NT4 Explorer in Windows 2000